How Does FEMA Help When Disaster Strikes?

If you’ve been reading the newsfeeds for the past few days, you’ve probably been following the trail of destruction that Hurricane IDA and the western wildfires have caused.  Being that all of us who live in Florida have had to deal with both these scenarios in the past couple decades, you might wonder if your home takes a direct hit, how much help can you expect from the federal government.  Below are some of the things I discovered about the Federal Emergency Management Agency, better known as FEMA.

How long has FEMA been around? Although the agency was created in 1979 under the Carter Administration, FEMA wasn’t really on the map in most people’s minds until Hurricane Katrina pulverized New Orleans and the Mississippi Gulf Coast in 2005.  That was mainly due to the shortcomings of the response that left tens of thousands without adequate food, water, or shelter.  So poor was the agency’s response, that President George W Bush signed into law a year later the Post-Katrina Emergency Reform Act.  The revamped emergency agency has since then proven better able to provide the pubic with assistance when natural and manmade disasters rear their ugly heads.

How does FEMA work?  While the President has the sole authority to declare an area a disaster area, he relies on the governors of affected states to request federal disaster relief.  When such a declaration is made, FEMA is there to mobilize personnel, authorize funds, and coordinate everything from evacuations to reconstruction.  They are also there to assist those in need of food, medical care, and housing after a disaster.

What has FEMA done lately? Since Hurricane Ida cut a swath of destruction from the Gulf Coast to the East Coast recently, FEMA has doled out more than $165 million in grants and received more than 13,500 flood insurance claims.  They’ve deployed eleven Incident Management Assistance Teams in six states, and fourteen FEMA Corps Teams responsible for coordinating survivor assistance in Louisiana, Mississippi, New York, New Jersey, Pennsylvania, and West Virginia.  Thus far, more than 1,100 FEMA employees have been dispatched to deal with Hurricane Ida alone.  This doesn’t include the 5,200 members of the National Guard, 420 members of the Army Corps of Engineers, 12 search and rescue teams, plus thousands of other federal employees who were called on to assist in coordinating everything from low-interest disaster loans to freight hauling.  The agency is also busy martialing a small army of volunteers that are essential to assisting victims as well as repairing critical infrastructures including medical response, water treatment, and electrical generation/distribution.

What kind of response can victims expect from FEMA? While most natural disasters are seen  before they impact an area, what’s much harder to predict is the extent of damage they can afflict.  That’s why FEMA has created a national network of resources and contacts that can be quickly called to action when a disaster occurs.

The Department of Health and Human Services deployed hundreds of medical personnel to assist with medical treatment of disaster victims in Louisiana.

The Department of Energy has authorized the release of a portion of the Strategic Petroleum Reserve to help those in affected areas access needed fuel.

The Defense Logistics Agency was tasked with providing municipalities with high output generators and fuel support.

The Army Corps of Engineers activated Operation Blue Roof to aid homeowners whose homes were damaged by Hurricane Ida.

The Federal Communications Commission is working with cellular carriers to give those in the affected areas the ability to roam freely on any available wireless network while repairs are being made.

USACE Temporary Emergency Power Planning and Response Teams have been sent to affected areas in Mississippi and Louisiana to help get the lights back on for more than a million households blacked out by the hurricane.

What do you need to do if you ever find yourself in need of help from FEMA?  First you need to document the damage for your insurance carrier before you file a claim with FEMA. While the agency won’t pay for coverage provided by your insurer, they may be able to help in areas where your homeowner’s and flood insurance do not.  If you’re unable to immediately return to your home, make sure you document the damage before you start tossing away any water damaged items when you return.  The best way to document the damage is with a combination of still photos and video that should include damage done to your home, sodden personal items, and even the waterline caused by any flooding.  When documenting damaged or destroyed electronics and appliances, make sure you include the make, model, and serial number of the items.  Your insurance adjuster will also need to see this evidence to process your claim..

Are You Covered if Your Dog Bites Someone?

By Catherine Powell Image courtesy Pixabay Being a dog owner myself, I’m always ready to field questions about whether a dog bite is a... 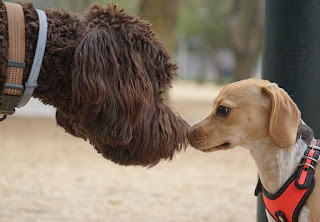