The Impact of a DUI or DWI Conviction

The law labels one infraction DUI, Driving under the Influence and the other DWI, Driving While Intoxicated.  Get tagged for either of these and you’re in for the ride of your life through the courts.  While the two designations sound eerily similar, the effects that either can have on your driving privileges, your finances and your freedom can be quite different.  What’s even worse is that the requirements for both can vary significantly depending on your age, your occupation and the jurisdiction in which you get pulled over.  Before a pair of flashing red lights has you seeing red, I thought I’d take the time to walk you through the ins and outs of getting pulled over while impaired.


They Only Come Out at Night

While it can happen at any hour of the day or night, 90% of DUI collars are made after the sun goes down.  That’s because that’s when most people go ought for a drink or two.  Whether it’s because a cop sees your car cross the dotted white lines, you didn’t come to a complete stop at a stop sign, or your speed appears to be erratic, once you’re pulled over, the police have the right to assess your sobriety.  This can consist of a field sobriety test and/or a breathalyzer test that’s used to assess your blood alcohol content (BAC).  If you are an adult who isn’t driving a commercial vehicle and your BAC is at or above .08 in most states, you’ll be arrested for DUI. (In Utah, the legal limit was reduced to .05 percent in 2018.)  If you’re a teenage driver, anything at or above .02 percent is considered Driving Under the Influence whether you’re noticeably intoxicated or not.  If you’re driving a commercial vehicle, many states enforce a limit of .04 percent for DUI arrests, even if the vehicle is a rental truck.

Alcohol isn’t the only thing that can get you pulled over and locked up for a DUI.   The same laws also apply to driving while under the influence of marijuana.  While there is no breathalyzer test for marijuana, if an officer smells the stuff on your breath or clothes, you’re likely going to wind up locked up even if you have medical approval to use it.  Depending on the state in which you’re pulled over, proof of impairment could require a blood test, or it could hinge on the testimony of the arresting officer as to the observations made of your driving.

While some states use DUI and DWI interchangeably, others consider DWI a more serious infraction of the law.  Driving While Intoxicated is used when the blood alcohol levels are considerably higher than the minimum or the driver has been arrested for the same infraction more than once.  Other states have a zero-tolerance policy that doesn’t distinguish between the two offenses.

Either way, if an officer deems you to be impaired for any reason, he or she isn’t going to let you get back behind the wheel.  The next ride you’re likely to take is in the back of a squad car as you’re driven to the station to get booked.  (The exception is if you were injured in an accident caused by driving drunk, in which case you’ll most likely ride to the hospital in an ambulance only to be booked later.)

The amount of time you can expect to spend in jail depends on the severity of the infraction.  If your BAC was at or just over the limit, you’ll probably spend only a day or two behind bars.  If your BAC was significantly higher or you’re a repeat offender, you could wind up being  incarcerated for a significantly longer period.  If you were involved in an accident that resulted in injuries to any other party, expect a much longer stay.

Driving is a Privilege, Not a Right

In 44 of 50 states, a DUI or DWI conviction will result in a mandatory suspension of your license for a minimum of 90 days up to a year with your first offense.  Additionally, many states will impound your vehicle when you’re charged with either a DUI or DWI.  That doesn’t necessarily mean you won’t be able to drive.  In some states, drivers are permitted to drive once they install an ignition interlock that has a built-in breathalyzer used to prevent their car from starting if any alcohol is detected on their breath.

Once you’re arrested for either offense you can expect to pay thousands of dollars in legal fees and penalties.  You can also expect to be sued by anyone who was injured while you were behind the wheel.  You may also be required by the court to pay the cost of your incarceration, even if the offense is considered a misdemeanor.

“In Arizona, you are required to pay for your own jail time as if you were staying in a hotel.  Unlike a hotel, the county jail does not have any amenities.  In Maricopa County, the housing per diem rate is established the the County Board of Supervisors.  They charge inmates for every day they are housed in county jail beginning on the day after they were booked until the day they are released from jail.  The per diem rate includes health care services, where applicable, provided in the county jail or by other health care providers.” Law offices ofCraig, W. Penrod, P.C.

Another financial hit you can expect to take is the one your insurance company will impose if you are convicted.  Even if it is your first conviction and you were deemed to be just over the legal limit, you can expect your insurance rate to rise by $1,000 or more.  In addition, if you live in Florida or Virginia, you ‘ll be ordered by the court to get an SR-22 or an FR-44, which will require you to call your insurance company to add either to your policy. Your insurer will then file the required paperwork with the state.  An SR-22 proves you have car insurance that meets the minimums required by law.  An FR-44 is similar to an SR-22 with additional requirements for added liability coverage.  Either way, your insurance company and the state will deem you a high-risk driver for years to come.

Like it or not, all insurance companies determine your rates by assessing the risk associated with insuring you.  While moving violations, an accident or multiple claims filed in a short period of time increases the risk of insuring a driver, having a DUI or DWI conviction places any driver in the high-risk category.  That’s the bad news.  The good news is that the designation doesn’t last forever.  However, in most states, a DUI or DWI will remain on your driving record for 5 to 10 years.  Additionally, a conviction can haunt you for years to come, affecting everything from employment prospects to obtaining credit.  While a conviction won’t show up on your credit report, the costs associated with a DUI/DWI can drive most people into debt.  Here are some facts gleaned from creditcards.com:

1.      The total cost of a first-time drunk driving conviction in Illinois is $16,500.
2.       A-1 Driving School Inc., in Atlanta, charges $355 for its DUI class and costs can reach several thousand dollars for repeat offenders who have to take longer classes.
3.       In Pennsylvania, a fine could cost $300 for a first-time offense with a blood alcohol level of between .08 and .1, and up to $10,000 for a third or fourth drunken driving offense in 10 years with a reading of .16 or higher.
4.       You might have to pay a bail bondsman to get you out of jail, as well as an impound fee for your car and even a monthly fee to participate in a required community service program.  You also could have to pay for monitoring, such as an ignition interlock system on your car, if that’s required.

The Cure for DUI/DWI

While the effects of a DUI/DWI conviction can be devastating, there is a cure.  Any time you drink alcohol anywhere other than at home, either have a designated driver or hail an Uber.  When you consider the toll that a DUI or DWI conviction can have on your job, your finances and your family, you need to think twice about putting down your keys before you pick up that drink.

Why is a Vehicle's VIN a Very Important Number?

By Catherine Powell Image courtesy flickr If you’ve ever bought or leased a car you know that it came with a unique VIN.   But wha... 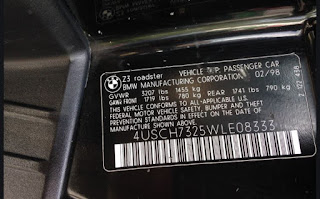