The Terrible Truth About Traffic Tickets

If you're a licensed driver in Florida like I am, then it should come as no surprise that there are lots of drivers who don't follow the rules of the road.  In fact, on average a traffic accident occurs every 90-seconds in the Sunshine State.  (401,170 in 2021) That doesn't count for all the traffic tickets written to drivers who committed infractions. (2,479,904 statewide and 155,424 in Duval County alone in 2021)  While getting a traffic citation can mean paying a heavy fine, it can also cause your auto insurance rates to rise.  To keep you from having to find out the hard way just what a traffic ticket can cost you in the long run, I thought I'd take a few minutes to share some thoughts on that subject.

Do you have a lead foot? Then it can set you back anywhere from $129-$454 to pay the fine for speeding up to 30 MPH over the posted limit.  Anything faster than that can result not only in a hefty fine, but it could also lead to suspension of your license.  That's right, any driver caught speeding 30+ MPH over the limit will not only receive a minimum $369 fine, but they will be required to face a mandatory court hearing for reckless driving which doesn't include the cost of legal representation.  That also doesn't include a hefty increase of at least $980 per year to your auto insurance premiums that you'll be forced to contend with for at least 3 years since that's how long it takes the points to expire. This means if you want to keep from spending hundreds or even thousands of dollars on needless speeding tickets, slow down!

Running a red light or a stop sign will cost you a minimum of $125 if you are cited in Florida.  Additionally, 3 points will be added to your driving record. If a red light camera snaps a picture of you running a red light, the fine jumps to $158.  The average cost for running a stop sign in Florida is $168, but it can be twice as costly if you are ticketed in a school zone or construction zone.  There will also be 3 points added to your record.  Three points can cause your insurance to jump by as much as 23% in Florida.

Texting while driving will cost you anywhere from $30 for a first offense (with no points) up to $100 with 3-points for repeat offenders.  Since 2019, police in Florida have been able to write tickets for drivers caught texting behind the wheel for one reason: Texting while driving is the fast lane for causing accidents.  This costs all drivers who are forced to pay higher insurance costs.  In 2021 alone, nearly 1,800 drivers were cited for this offense alone.  Drivers in Florida can also be given a ticket for using a handheld cellphone while behind the wheel.  Since distracted driving is responsible for nearly a million accidents per year, this is one law that needs to be heeded.

Failing to use your turn signal can result in both a fine and four points on your driving record.  This can also apply if you fail to signal with adequate warning.  In other words, if you flip on the signal at the last second before turning, this can also result in a ticket.  Worst still is the fact that you have only 30-days in Florida to either pay the ticket or contest it in court.  Failure to do so could result in your license being suspended and an additional late fee can be added to what you owe.

Not wearing a seat belt could result in a ticket or worse.  That's because seat belts aren't only there to keep driver and passengers inside the vehicle in the event of an accident, they're also vital in keeping anyone in the front seat from being injured should the airbags deploy.  Since nearly half of the people who died on Florida's roads failed to buckle up, the state's "Click it or Ticket" law was created to save lives.  This law applies doubly for children who need to be in an approved safety seat. The fine in Florida is $30 for adults and an additional $60 for drivers who fail to adequately restrain their children in the vehicle.  Last but not least, any driver cited will receive 3 points on their record.

Driving under the influence is one of the most expensive infractions a motorist can be charged with.  Not only do the fines run from $500-$2,000 for a first time offender, you will also be forced to post bail and pay court costs and attorney fees to defend yourself.  You may even be required to pay an additional $100 or more to get your car back if it's impounded by the police.  All this because your blood alcohol level exceeded the .08 imposed by the state. (That's the equivalent of 3-4 drinks.) But this isn't the only cost you'll bear if you are found driving under the influence.  Expect your insurance to go up by 48% or more in Florida.

Following too close to a vehicle ahead of you, otherwise known as tailgating, is an offense that carries much the same penalties as running a stop sign or red light.  If you don't think it can happen to you, be aware that in 2021 1,606 drivers were ticketed for tailgating in Duval County alone.  The reason tailgating is frowned upon is that it can cause multi-vehicle accidents should the lead car suddenly brake.  The reason many drivers don't realize they're following too close is because they don't understand the fact that as speed increases, the safe following distance quickly escalates.  To be safe at any speed, you need to maintain a 2-second gap between you and the vehicle ahead in dry weather and a 4-second lead if the road is wet or it's raining.

Can you beat a ticket in court? It's possible to be vindicated in court if you are given a ticket.  One way to do so is if the officer who wrote the ticket fails to appear in court.  Another couple of ways to prevail if the officer does make an appearance is to challenge his or her observations or to assert that you were forced to break the law to avoid doing greater harm, such as avoiding an accident.  That's the good news.  The bad news is if you choose to fight a ticket in court, you'll be required to pay court costs and possibly attorney fees as well.  Plus, you may still be found guilty of breaking the law.

If you plead guilty can you avoid having points added to your record?  One way to eliminate 2 points associated with a non-criminal moving violation is to attend traffic school.  The stipulation is that you can only do so once in a 12-month period and only take the class 5 times in a lifetime.  While you'll still be required to pay the fine within 30-days, by removing 2 points from your record you will reduce or eliminate any significant rate hike to your auto insurance coverage.

The Real Cost of a DUI Charge

By Catherine Powell Image courtesy of Pixabay Last month I covered the costs incurred when a driver gets a traffic citation.  This month I ... 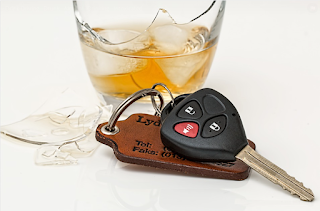