What Should You Do When Your Vehicle is Totaled?

A friend of mine was recently involved in a single-car accident where he ran his vehicle up on a curb at less than 20 MPH after discovering a wasp in the front seat.  Instead of pulling over to shoo the bug away, he tried to roll down the window to get the job done while the car was still in motion.  As a result, he hit a fence post causing both front airbags to fire and putting a sizable dent in the right front fender.  Still, he was able to drive the vehicle home after filing a police report and notifying his neighbor that he'd get their fence repaired.  So far, so good.  What came as a shock was when he filed a claim with his insurance company only to learn soon after that the car was being declared a total loss.  At the time, he drove a 6-year-old SUV with less than 50,000 miles on it.  He called to tell me this, as well as to wonder why the vehicle was being totaled when he knew the cost to repair it wouldn't be as much as it would cost to replace it.  That's when I explained to him the rules regarding how insurance companies determine when it's time to total a vehicle.

A vehicle doesn't have to be a total wreck to be totaled. - Most people have seen the result of a serious car accident where one or more vehicles look like a crumpled ball of broken glass and torn metal.  This is the picture the average motorist has in their head when they think of a vehicle being totaled.  However, that's not how insurance underwriters see it.  What they look at is the value of the vehicle versus what it would cost to repair it as good as new.  Whereas in decades past, before vehicles became computers on wheels, it didn't cost all that much to have a few dents hammered out of a fender or to replace a smashed headlight.  Today's vehicles aren't so simple to fix.  In fact, they're designed with crumple zones meant to mitigate the kinetic energy caused when two vehicles collide, or as in the case of my friend, when one vehicle comes to an abrupt stop after hitting an immovable object.  As a result, far more damage can be done to a late model vehicle than those manufactured in years gone by.  Not only do minor accidents require more extensive and expensive repairs than did vehicles of yesteryear, but due to the addition of airbags which can cost upwards of $1,000 per unit to replace, it doesn't take long before the cost of repairs exceed an insurers willingness to do so.

I explained these facts to my friend before adding that as far as the insurance industry is concerned, the damage inflicted on a vehicle doesn't have to equal the cost to replace it in order to declare it a total loss.  In some states the ratio only has to reach 51% of a vehicle's value for an insurance underwriter to declare a vehicle a total loss.  In Florida, where my friend and I live, the number is more like 80%.  Again, that's 80% of a vehicle's value, not what it would cost to acquire a new vehicle of the same make and model.  Fortunately for my friend, his insurance company cut him a check that helped him secure a new set of wheels.  For those of you who are still wondering about the metrics used to declare a vehicle a total loss, below are some additional details.

#1: What happens if your car is totaled but you still owe money on it? - Whether you lease a vehicle or have an outstanding car loan, if an insurance company totals your vehicle, the first thing you'll be required to do is to pay off the outstanding balance.  Sometimes this may mean digging into your pocket to cover the balance.  This is especially true if the vehicle you currently drive is less than 3-years old.  Remember, an insurance company is only obligated to pay you what a vehicle is worth when it is totaled.  This figure includes depreciation.  That's why some motorists purchase gap insurance to help cover the cost of depreciation during the first couple of years of ownership to avoid having to pay if their vehicle is totaled.

#2: What if you don't agree with the insurer's assessment that your vehicle should be totaled? - As in the case of my friend, he asked me if he couldn't simply buy the vehicle back from the insurance company.  I told him while that was possible, the time and trouble it would take to do so would probably not make the effort worthwhile.  I then explained to him that anyone wishing to buy back a totaled vehicle needed to not only make arrangements with their insurer to purchase it, they'd also need to contact the local DMV to obtain the proper forms needed to start the process.  That's because before a totaled vehicle will be allowed back on the road it needs to be repaired, pass an inspection, and be issued a salvage title.  During the time it takes to complete the process, the owner will need to rent a vehicle if they wish to get around.  Once I explained all this to my friend, he changed his mind and started shopping for a used car.

#3: How much can you expect to receive from your insurer should they total your vehicle? - That depends on a number of factors, including make, model, and year of manufacture, along with mileage, wear & tear, and depreciation caused by any previous accidents the vehicle was involved in.  This means unless you purchased gap insurance or new car replacement coverage, chances are the settlement offered by the insurance company won't cover the cost of purchasing the latest model of the same car you currently drive.  However, if your insurance company offers you less than what you believe your vehicle is worth, you can dispute the payout.  To do so takes time to research the value and haggle with your insurer.  In some cases it may even require you to hire a private appraiser out of your own pocket to get your insurer to agree to pay more than they initially offer.  All the while, you'll have to make some other arrangement to shop, travel to and from work, not to mention being taken to any other appointments you have until you and your insurer settle on the amount of the payout.

#4: What steps should you take if your vehicle is declared a total loss? - First and foremost after you file a claim only to come to find that your vehicle has been totaled, you need to have it towed to a repair center approved by the insurance adjuster.  While the damage to the vehicle is being assessed you'll need to provide your insurance company with a copy of the vehicle's title.  If you don't have one, you'll need to request a copy from the Department of Motor Vehicles.  While you're waiting for both of these to take place, take the time to research the vehicle's Actual Cash Value (ACV).  This can be done online. One website designed to help you research the ACV is Kelley Blue Book.  You can also use this site or others like it to get an idea of what it will cost to purchase another vehicle.  Last but not least, if you don't own the vehicle outright, make sure you review your loan or lease agreement to determine what's owed on the vehicle being totaled, since the bank or the leasing company will need to be satisfied before you receive one thin dime from your insurance company.

How to Rid Your Property of Rodents

By Catherine Powell Image courtesy Pixabay The pitter-patter of little feet is usually something that makes most folks smile, unless the so... 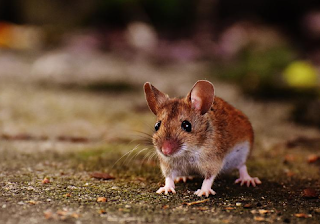