Carjacking Can Happen to Anyone

It's every driver's worst nightmare: You're stopped at a traffic light or parked at the mall when a gunman points a pistol at you and demands you turn over your vehicle or face the consequences.  What you do in the next few seconds could alter your life irrevocably.  For one Jacksonville sailor, the incident which was captured on his car's dashcam told a frightening tale of escape and near death as he jumped on the accelerator to evade the carjacker only to learn later that a bullet missed his head by inches.  Before you wind up having to make a life or death decision, there are some things you need to know about carjackings that could save your life.

Do you know how to avoid being targeted? - While carjacking can seem like a random event, it usually isn't.  Car theft is one motivating factor behind carjackings, especially since the advent of antitheft technology makes it much more difficult to steal a car unless the keyfob is in close proximity to the vehicle.  However, it isn't the only one.  Gangs have been known to steal a vehicle at gunpoint only to use it to commit a subsidiary crime like a drive-by shooting.  Burglars and stickup artists think nothing of taking a car at gunpoint only to use it to cover their tracks during a crime spree.  The bottom line is car thieves don't want to be caught fleeing the scene of the crime by the police.  This means they usually stalk victims late at night in out-of-the-way places.  The first step to avoiding carjacking is to refrain from making yourself a likely victim.  There are several things you can do to stay off a carjacker's radar:

1. Be alert. What most people don't realize is that many carjackings occur before a driver enters their vehicle.  It's a dicier proposition for a carjacker to deal with a motorist inside a running vehicle.  It's a whole lot easier to steal a car by approaching a victim as they fish for their keys when they return to their vehicle.  If you pay more attention to your smartphone than what's going on around you in a parking lot, you just painted a bullseye on your back for a carjacker.

2. Carjackings don't just happen in high-crime areas.  They also occur in upscale neighborhoods.  Face it, if you were a thief looking to boost high-end cars, where would you look?  Business parks and high-end retail shops are like candy stores to carjackers.  That means if you live, work, or shop in areas that cater to high-income earners, you had best keep your head on a swivel.

3. Those who hesitate are lost. One of the quickest ways to be victimized by a carjacker is to spend several minutes sitting behind the wheel before you back out of a parking spot.  Hesitation is like catnip to carjackers.  Instead of wasting time checking your text messages or deciding which tunes to listen to on the road, one of the best ways to avoid being victimized by a carjacker is to start the engine and get back on the road.  When exiting your vehicle, don't dawdle or stare at your smartphone.  Head with purpose toward your destination before your journey is cut short.

4. Windows up and doors locked. Another favorite tactic employed by carjackers is to hop in the passenger side as soon as you get behind the wheel.  To defeat this tactic it's imperative that you lock all your doors and keep all the windows up until you're underway.  This way if a carjacker is hiding next to or behind your vehicle, you'll have a chance to pull out before the thug can climb in.

5. At a stoplight, don't pull up too close to the car in front of you.  If you spot someone coming around the side of your vehicle, leaving enough distance between you and the car ahead will give you the time to pull away if traffic permits.

6. On the road, a wave can make you look like a fish in a barrel. If you see a motorist motioning for you to pull over, don't do it unless you know the driver.  It could be a trap designed to make you easy prey.  Unless your vehicle has smoke emanating from beneath the hood or your low tire warning light is on, there's no reason for you to pull over anyway.  Even in that case, you need to make sure you pull into a well-lit area with lots of people.  Carjackers hate witnesses almost as much as they hate seeing a cop.

7. Don't be fooled by a bump-and-rob carjacker. Carjackers sometimes work in teams.  One of the tactics they've been known to employ is to bump into the car ahead of them.  Then when both cars pull over to check for damage, instead of producing an insurance card, the carjacker will produce a pistol and demand your keys.

8. What should you do if you get carjacked? Unless you're 100% certain that you can make a clean getaway without getting shot, the best thing to do if you're ordered from your car at gunpoint is to give the thief your vehicle.  Your life is worth much more than your vehicle, which is insured against theft.  That being said, if you have other passengers or kids in the vehicle, make sure you get them out first before turning over the keys.

9. Never let a carjacker talk you into staying in the vehicle. If the carjacker tells you to slide over to let him get in the driver's seat, slide all the way out the passenger door and run like hell.  If a carjacker tells you to get back into the vehicle after climbing behind the wheel, pretend to comply then duck and run down the side of the vehicle toward the trunk before running toward the nearest open door.  If you're in a parking lot or garage and get carjacked, duck down and run between parked cars.  If a carjacker loses sight of you, he isn't going to waste time trying to track you down.  He'll want to exit the scene as quickly as possible.  It's a fact that the odds of you being hurt, raped, or killed multiply if you let a carjacker talk you into going along for the ride.

10. Are there ways to thwart a carjacker? While some people have used pepper spray to thwart a carjacker, this is a dicey tactic akin to bringing teargas to a gunfight.  Even if you have a permit that allows you to carry a concealed weapon, bear in mind that it will take you longer to brandish a pistol than it will take a carjacker to pull the trigger.  Better to install a tracking app on your vehicle that enables you to locate it in real-time.  This way if your car gets stolen, you can guide the police to its location once you are out of harm's way.  Better yet, if your car is equipped with a remote engine stop app, you can disable the vehicle once you're out of range.

10 Ways to Prepare for Hurricane Season

By Catherine Powell Image courtesy Pixabay With the relatively docile weather pattern that north Florida has been experiencing lately, most... 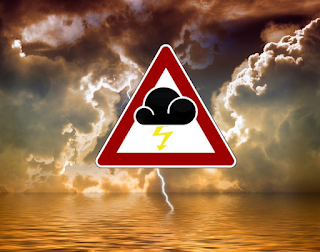