The Dog Ate My Home

If you own a dog or a cat, you know they sometimes misbehave.  If they aren't stealing scraps of food from the table, they're leaving you little smelly presents on the floor. Sometimes they like to chew on everything from your slippers to electrical cords and furniture.  Large dogs have been known to chew holes through sheetrock or wooden doors.  That's not to mention the kind of mayhem a wild animal can cause if one gets trapped in your garage or decides to move into your attic.  In short, the damage animals can inflict on a home can be substantial.  If you ever wondered what kind of animal damage is and isn't covered by homeowner's insurance, you've come to the right place.

Does homeowner's insurance cover damage caused by pets.  If Fluffy or Fido tear up your couch, shred your designer draperies or make like a termite to chew a bowling ball-sized hole in your garage door, the damage isn't a covered claim.  As far as the insurance company is concerned, any pets that reside in your home should be under your control and the insurance carrier won't be responsible for any damage done by your four-legged friends.  The only exception to this rule is if your fish tank springs a leak only to cause water damage, which is a covered peril on your homeowner's insurance policy.

What happens if your pet causes damage to someone else's property?  If you take your dog with you to a neighbor's house and it takes hold of the electrical cord only to pull your buddy's brand new $2,000 85-inch UHD Smart TV off the wall with a crash, you won't be forced to move to another neighborhood.  That's because the damage done by your pet to another's property is covered by homeowner's insurance.  That's the good news.  The bad news is you'll still be on the hook for the insurance deductible.  Bad dog!

If your pet cat roosts under the hood of your car only to chew through the wiring, or your Irish setter does a header off your car door that makes a big dent, is the damage covered? It is, provided you carry comprehensive coverage.  If you only have collision coverage, the damage will only be covered if the dog was driving the car.  Seriously, comprehensive coverage applies to all kinds of damage to a vehicle caused by animals.  If your pet dog decides to eat your Italian leather bucket seats, you can file a comprehensive claim to get the seats repaired or replaced.  If you hit a deer and total your car, it's a covered claim.  If a bear uses its claws to open your car up like a can of beans only to tear the dashboard to pieces to get at the breath mints stored in the glove box, it's a covered claim.  If that same bear were to tear open your home's back door to get at the goodies in the refrigerator, the door would probably be a covered claim, but not the fridge or its contents.  However, you'll still be out the deductible.

What kind of wild animal damage is covered by a homeowner's policy? – That depends on how the damage was done and what did it.   Raccoons and bats aren’t usually considered vermin and are usually considered covered perils by most homeowners’ policies.  If the damage was caused suddenly, most insurers consider it a covered peril, minus your deductible. If the damage was caused gradually, most homeowners’ policies exclude coverage.  That means if rodents were to gnaw through a water pipe that then floods your home, you’re covered.  If the same rodent gnaws through the same pipe only to cause a slow drip that ruins your ceiling a year later, you’re out of luck. Keep in mind, while some forms of collateral damage caused by pests are considered a covered peril, pest control is not covered by your homeowner’s policy.

What happens if a bear wanders into your garage only to tear your power tools to bits?  While the damage caused to your home or other covered structures on your property may be covered by your homeowner's policy, damage to any personal items stored there are not.  Likewise, if a raccoon breaks into your attic, your policy may pay to repair the hole it chewed through the roof, but it won't pay to replace any items stored there that the raccoon chewed on.

What should you do if you aren't sure what kind of animal damage is covered by your insurance policies? – That's easy.  Take the time to call your insurance agent to have your policy reviewed with any of the abovementioned damage in mind.  Your agent will be able to advise you as to the coverage your policy provides, as well as options offered by other insurance carriers.

By Catherine Powell Image courtesy Pixabay If you or someone you know is considering getting their private pilot's license, there are a... 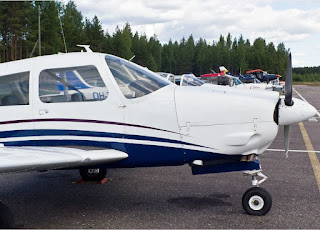